The year 2016 was dedicated to the five-hundredth date of death of Jheronimus Bosch (approx.1450-1516). His famous paintings on which he displayed fierce scenes with beasts, monsters and devils are globally very well known. On contrary, his fabulous drawings are much less famous.

Willem van den Berg was inspired by the drawings of Jheronimus Bosch, which can be seen as small self-contained pieces of art, and he built a special watch as an ode to the master-draftsman that does justice to the status he acquired. It illustrates the role of Jheronimus Bosch as a pioneer of the Dutch draftmanship. Central in the watch is the drawing “Het woud heeft oren, het veld heeft ogen”, (Museum Kupferstichkabinett Berlin). The drawing is considered the first drawing in North West Europe that is made as an independent piece of art.

Like in every watch of Willem van den Berg, the story that is told is the base of the design. The owl is used multiple times by Bosch and it has an ambiguous symbolism. It was, at the same time, a symbol for good and evil, the light and the darkness. This didn't change in time but was present at the same time.

The scene is a literal depiction of the expression 'horen, zien en zwijgen'.

There were various versions of this expression when Bosch lived. In the Kupferstichkabinett in Berlin for example, there is a picture from 1546 with the inscription: “Dat Velt heft ogen/ dat Wolt heft oren/ Ick wil sien/ swijghen ende hooren”, this is a call for restraint.

Above the picture, there is written in Latin: Miserrimi quippe e igenii ui ïvetis et nüq ïvenidis. (Translation according to author Thomas Vriends) “It is, of course, a poor soul that always holds on to the things that are already made up instead of the things that are still to be made up." It is the only written text for Jheronimus that is known.

In the centre of the hand engraved silver watch dial, you'll see an old bare hallowed tree with an owl on it.

On the branches of the tree, there are a certain amount of birds. Two ears grow from the forest behind it. The eyes are placed on the indication for half an hour on the numeral ring. (Drawing on the front). The likewise engraved and blued as "feathers", the minute hand as a drawing pen. The central second hand is constructed out of a real feather.

The watch is presented in a hand made "book" that has been covered in parchment, consistent with the traditions of the 15th century. In the numbered book, there is the watch as well as documentation, a memorial tablet of the portrait of Jheronimus Bosch, a drawing of “Het woud heeft oren, het veld heeft ogen” and a book signed by the author Thomas Vriens; “De Tekeningen van Jheronimus Bosch”.

Jheronimus Bosch will always be connected to his city 's-Hertogenbosch and was an intellegent painter/artist that developed in the late medieval ages who belongs to the absolute top of Dutch masters. Jheronimus Bosch, the name by which he signed some of his works, was actually called Jheronimus van Aken. His ancestors, originating from Aachen, established themselves in Nijmegen as painters. His grandfather, Jan van Aken, went to ’s-Hertogenbosch to exercice painting there. The family tradition was continued here by de Van Akens. Presumably, multiple family members were working in one painter studio.

This exceptionally limited watch highlights an other Jheronimus Bosch, and it suits the great master well. 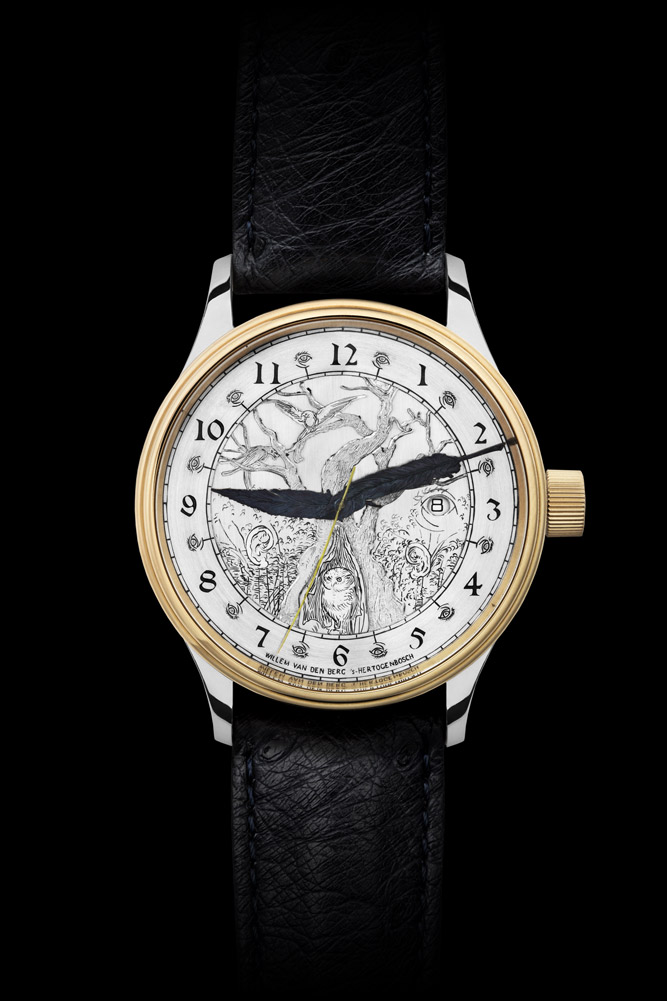